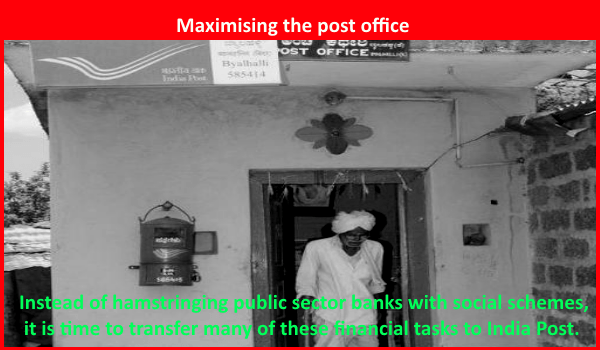 Instead of hamstringing public sector banks with social schemes, it is time to transfer many of these financial tasks to India Post.

Public sector bank employees are so overwhelmed by the sheer number of government-sponsored schemes they are saddled with, that they have begun to come up with parodies. One such spoof scheme is what they have named the Pradhan Mantri Sishu Palan Yojana, where customers with SB accounts can leave their children with the bank manager for babysitting services at a nominal cost.

This might be just a joke, but it does reflect the deep frustration among bankers at being mandated to carry out an enormous number of the government’s social objectives.

There has been a lot of commentary asking the government to reduce its involvement in Public Sector Banks (PSBs). The government has been asked to reduce holdings, step away from appointments of chairmen and board of directors, and to not interfere in bank schemes such as the farm loan waiver or mandatory priority sector lending, But nobody is talking about the government using PSBs to roll out its various populist schemes, which will affect their day-to-day operations in the short run, and its overall competitiveness in the long run.

Each scheme usually comes with countrywide targets set by the concerned ministry, which are then distilled and divided into smaller numbers for each bank branch. For example, the Pradhan Mantri Jan Dhan Yojana (PMJDY) has an ambitious target of opening 10 crore accounts, to be divided among the banks. One PSB was assigned a target of 1 crore accounts and one of its branches in Bengaluru had a target of 1,000 accounts to be opened within a week. Such targets are rarely met, and even if they are, they rarely match the desired outcomes, due to complete misalignment of incentives. With a severe dilution of Know Your Customer norms, there is enough evidence about the actual success of the scheme — 75 per cent of the accounts are empty, multiple accounts have been opened by single persons, and there are huge costs that the banks bear (Rs. 200 per bank account).

But what is perhaps the biggest cost to banks is the opportunity cost they lose in implementing these schemes. Ambitious targets and time frames take up precious time that could have otherwise been used to carry out the original mandate of the banks — accept deposits and make loans. All normal bank activity comes to a standstill during such public drives, with employees being swamped by the targets. Even big business clients are asked to wait until the pressure eases. The PMJDY drive halted all normal banking activities for an entire week.

At a time when public sector banks are finding it hard to beat the competition posed by deep-pocketed foreign and private sector banks, they can ill afford to let their biggest customers take a back seat while they meet social goals.

However, since social security measures are important, how about using another government-run behemoth, India Posts, for this task? As it struggles to find relevance in the digital age, perhaps the answer lies in reusing its enormous reach for delivering social schemes. In the U.S., this idea is being examined, and the U.S. Postal Service presented a report this month outlining exactly how postal banking could promote financial inclusion while turning in a neat profit for the service.

Two criteria have to be considered: reach and capability. India Post has a network of over 1.5 lakh branches across India, a reach that far exceeds all the PSBs combined. Of the 1.5 lakh branches, about 1.4 are in rural areas, compared to the combined 23,000 rural branches of the public sector banks.

India Post already runs the Post Office Savings Bank account, which handles cash worth Rs 6 lakh crore per year across 28 crore accounts. The service has also been quite successfully handling cash payments in the Mahatma Gandhi National Rural Employment Guarantee Act — nearly 5.6 crore MGNREGA accounts, and wages amounting to nearly Rs. 10,000 crore have been disbursed to beneficiaries through 97,709 post offices across the country. Of the three main building blocks of financial inclusion — cash storage, disbursing payments, and giving credit — India Post has already shown that it is quite capable of handling the first two.

In the longer run, for India Post to play a bigger role in the fulfilment of the government’s social objectives, the following steps can be taken: First, one of the smaller and healthier PSBs could be merged with Indian Post so that the latter acquires a banking licence and a trained workforce. Second, incentives could be offered to the present workforce to sit for the banking exams. Third, banking exams could be made a requirement for a percentage of the new recruits; and, finally, the banking division of the post office could be brought under the RBI’s regulatory purview.

With this, India Post can expand from financial inclusion to handling insurance and pension accounts, priority sector lending in rural areas, and many other financial functions as well.

Some post offices around the world have undergone this transformation quite successfully. The Royal Mail of the U.K., for example, does all the things a bank does and additionally even provides telephone and broadband service.

This move could free public sector banks from being yoked to social sector objectives and allow them to become competitive and function freely in the highly cut-throat banking sector. Simultaneously, it could harness the potential of the post office network in India.

(Anupam Manur is a policy analyst at Takshashila Institution.)