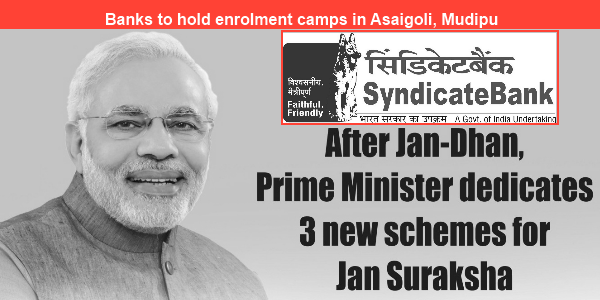 Syndicate Bank, the lead bank of the district, will hold camps in Asaigoli and Mudipu near Mangaluru on Sunday to enrol people for three social security schemes launched by the Prime Minister. Other banks namely Union Bank, Canara Bank, Indian Overseas Bank, Oriental Bank of Commerce, State Bank of Travancore and Karnataka Bank too will take part in the camps.

The Syndicate Bank is holding the camp in association with Jaya Manasa Trust. The camps will be held at Manasa Complex in Asaigoli and Kaveri Complex in Mudipu between 10 a.m. and 2 p.m.

Talking to reporters here on Wednesday, District Lead Bank Manager Prabhu Alagawadi said there had been a good response from the people to the three schemes. On the day of announcement of the three schemes on May 9, 1.2 lakh people enrolled in different banks in the district. By holding the camps, the bank was trying to reach out to more people, including those who did not have a bank account.

“We will help them open bank accounts at the camps,” he said.

K. Narendranath Kamath, Deputy General Manager, regional office, SyndicateBank, said 39,000 applications had been received at the bank’s 80 branches. Mr. Kamath said they would decide to hold more such events in other parts of the district depending on the response of people for the two camps.

A. Chandrahas Shetty, managing trustee of Manasa Trust, said the two camps were being held to ease the pressure on banks in enrolling people during banking hours.