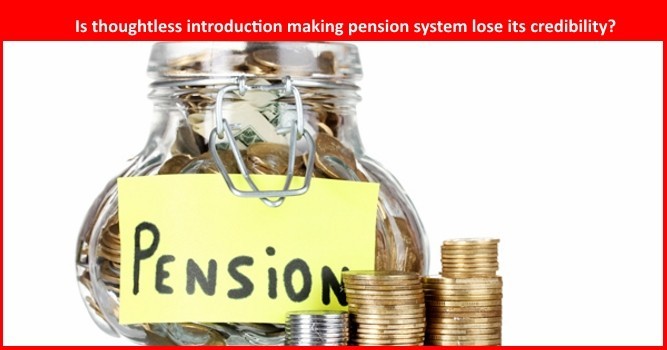 Sporadic launching of popular social security schemes has become a fashion for governments. The recently launched Atal Pension Yojana, will definitely provide some work and funds to the administrators of NPS and but may not to the subscribers

Eventually India has to debate the rationale for back-door introduction of National Pension System (NPS), denying an existing benefit to future employees of select organisations. None of the reasons put forth is convincing. The defined benefit pension scheme is retained for legislators, defence employees and all those who were in service prior to January 2004 and were enjoying the benefits of defined benefit pension schemes. The theory of increasing financial burden does not stand reason in such a situation.

Sporadic launching of popular social security schemes has become a fashion for governments. Atal Pension Yojana is one such scheme, latest arrival in the family of social security schemes. The scheme will definitely provide some work and funds to the administrators of NPS. Further benefits need to be debated. If authorities are genuinely interested in providing social security, efforts to harmonise the working of Employees Provident Fund Organisation (EPFO) and Pension Fund Regulatory and Development Authority (PFRDA) is essential.

For workers in the organised sector, the responsibility of ensuring adequate post-retirement care should fall on the employer, and the savings and funding, by whatever vehicle, should happen during the active service of the individual employee. Unfortunately, NPS does not factor in the adequacy of savings or the safety of funds generated or the guaranteed periodic payment of the amount saved in a systematic way to meet the post-job financial needs of the beneficiary.

Defined-benefit pension scheme should be restored in organisations, which should be guided to create pension funds based on actuarial studies. The thoughtless introduction of NPS has made pension system lose its credibility. The Indian government should at this late hour revisit the whole issue instead of making ‘popular’ announcements about social security. Finally, the bill for providing social security will be back at the doors of the tax-payer. There will be some relief, if the employees demand and get wages with built-in retirement benefit component and employers and employees together accept the responsibility of providing a post-retirement life to the employees commensurate with the life they lived while in service.

A public debate on the private intentions of the introduction of the now rechristened National Pension System is overdue. Structural changes in the pension and retirement benefit schemes should have been a necessary component of economic reforms in India introduced during the early 1990s. This did not happen in the natural way and as a result, dismantling of the existing schemes under this category happened in a crude and cruel manner and NPS, which got its entry through the back-door, remained orphaned for almost a decade.

Though New Pension Scheme was introduced through an executive order (read ‘without legislative mandate’) in 2004, the PFRDA Bill, 2011 was passed by Rajya Sabha only on 6 September 2013. The bill had been passed in the Lok Sabha on the previous day. The PFRDA, which has been functioning under executive authority, since it was set up in 2003, got a legitimacy of sorts, after almost a decade

The Defined Contribution-based New Pension Scheme (NPS) has replaced the Defined Benefit-based Pension Scheme and has been made compulsory for central government staff (excluding defence personnel, in the first stage) joining service from 1 January 2004. A slightly different version of NPS, somewhat similar to retirement benefit schemes offered by Mutual Funds has also been thrown open for subscription to the public. This article takes a view of NPS for central government employees and being gradually introduced by public sector organisations including banks.

Before the introduction of the New Pension Scheme following the budget announcement of 2003-2004, the major pension/retirement benefit schemes in operation were:

The Central government employees who were in service as on 31 December 2003 have a Defined Benefit Pension Scheme. According to a 2008 estimate, the net present value of the pension liabilities of central government now being met on a Pay As You Go basis was Rs3,35,628 crore (6th Pay Commission Report, 2008). Considering this staggering liability which grows proportionately with rise in inflation rate and periodical revision in pay structure, Central Budget, 2003-04 contained a proposal to introduce the new restructured defined contribution pension system for new entrants to central government service. The New Pension Scheme (NPS) for new entrants to central government service from 1 January 2004, except to Armed Forces, in the first stage, replacing the existing system of defined benefit pension system was introduced through a notification dated 22 December 2003

For those who get unduly perturbed by the pension liability of government, a word of solace comes from the following media report (2014) about Pension System in the United States:

“Using a more conservative method of accounting for financial gains in the marketplace, there is a $4.1 trillion gap between assets and liabilities — known as the ‘unfunded liability’ — of all state-level pension systems in the United States, according to State Budget Solutions, a fiscally conservative think tank that deals with tax and spending issues at the state level.”

This figure has further gone up in recent months and, remember, the permissible and actual aggregate public debt owed by the United States, in March 2015 stood at a little over US$18 trillion ‘only’.

The central government employees covered by the NPS are two-way losers. One, the huge costs savings for the government in pension pay out by the switch over to the defined contribution pension system from the defined benefit pension system is a direct charge on the overall remuneration package this category of employees are entitled to. Two, they do not have a window to air their grievances in this respect because the loss is not immediately felt and the full impact of the change will be felt only after 30 years or so when those who joined the service in January 2004 start retiring. It is also true that the anticipated savings in pension expenditure will also start accruing to government only by then.

A time tested social security arrangement available to a section of employees has thus disappeared without any alternative system in place. When one refers to social security arrangement, one has in mind all pension-related benefits including family pension. While in the private sector and profit making public sector undertakings employees, have an opportunity to bargain and settle remuneration based on their skill and market realities, government employees and those employed in quasi-government and statutory bodies are a helpless lot, whose bargaining power is stifled in the name of public interest. It is in this context that they deserve a special treatment at least in respect of social security arrangements like pension-related benefits.

The conscious exclusion of the category of employees covered by the NPS from the Sixth Pay Commission’s purview while referring pension-related benefits for the Commission’s review made it unnecessary for the Commission to even examine the impact of the change in the pension eligibility in the overall  remuneration package of this category of employees. It is another matter that because the introduction of NPS was at a time the Indian Equities Market was performing fairly well, there was a general feeling that pension funds are going to bring attractive returns.

Till 2009, there was no thought in the minds of authorities about the arrangements for payment of compensation/Family Pension to the survivors of central government employees who joined  service on or after 1 January 2004 and died in harness. When several such cases came up, as an afterthought, in 2009, Centre made some interim arrangements in this regard and decided to make provisional payment of Family Pension to such survivors under Rule 54 of the Central Civil Services (Pension) Rules, 1972. Such payments were subject to an undertaking to be furnished by the pensioner ‘to refund or adjust the provisional payments……out of the final entitlements as sanctioned by the Government at a future date.’ Such uncertainty and imposition of future liability is unheard of in the case of pension payment.

The stated objective of reducing the huge burden from Defined Benefit Pension Scheme by introduction of Defined Contribution Pension Scheme is not convincing as the financial burden is unlikely to come down at least for the next two decades.

It will be imperative for government to address issues like family pension, reasonable return on pension funds and review the adequacy of the present 10% contribution from government and employees to ensure a post retirement lifestyle commensurate with that the employees are used to, during their active service. It does not require much calculation to observe that in the existing form, the NPS will land the employees covered under the scheme, by the time they retire, in a very disadvantageous position compared to their predecessors who enjoy Defined Benefit Pension Scheme, as Government’s own estimates show a much larger outgo than the ten per cent contribution envisaged under NPS, for meeting the pension-related liabilities under the previous scheme.

From the employees’ side, a conscious effort to understand the scenario and factor in these concerns in their savings habits and also in future bargains of salary structure will be necessary.

All these point to the need for an overhaul of NPS to make it a really useful instrument for retirement planning. Otherwise, next generation will brand it a parasite which killed existing social security systems in India

The 2003 New Pension Scheme was imposed on the ‘future’ employees of the government and other organisations which had well-designed Defined Benefit Pension Schemes and later offered to the public with paltry government subsidy for external considerations and pressure from certain vested interests. Long after, in 2006-07, though for totally different reasons, ING Group and Indian Institute of Management, Bangalore undertook a joint research on pension systems in India at the instance of ING Global Retirement Services. The findings are available in the form of a 588-page book “Facing the Future: Indian Pension Systems”(By David JW Hatton, Naren N Joshi, Fang Li, R Vaidyanathan, S  Jyothilakshmi, Shubhabrata Das and Sankarshan Basu. Publisher: Tata McGraw Hill Rs625). One wishes that the Government of India and PFRDA revisits the analysis contained in this book which has gone into the evolution of new pension systems in several countries in the world and the relevance of those experiences in the Indian context.

Facing the Future claims to “analyse the results of extensive market surveys, draws from the experience of industry experts and studies the different pension systems around the world. The book encourages thinking on the pension issues which will lead to a viable solution to India’s problems.

Twelve years after the introduction of NPS, these observations may look a little unconvincing or odd. But the lingering feeling that a well-established social security system is being discontinued without any reasonable substitution makes one flag the incompetence of the NPS in its present form. It is pathetic that there is no evidence to show that PFRDA has taken note of the findings recorded in the book under reference for which its then Chairman Dhirendra Swarup had written a Foreword in 2007!