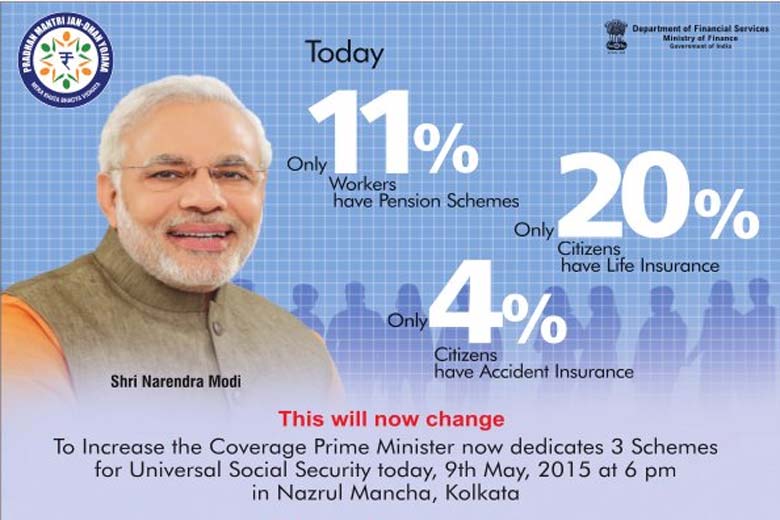 The schemes will be launched in Kolkata, capital of West Bengal where assembly elections are due next year.

There will be simultaneous nation-wide launch of the schemes through functions organised at 112 centres in various States and UTs which would be attended by the respective Chief Ministers or Governors and the Union Ministers, accroding to a finance ministry statement.

The initiatives are aimed at providing affordable universal access to essential social security protection in a convenient manner linked to auto-debit facility from bank accounts.

The schemes are expected to address the issue of very low coverage of life or accident insurance and old age income in the country, it said.

A higher level of APY enrolments from the informal sector will ensure better life chances for such subscribers in their post-retirement phase and resultant decrease in the burden on social security under the National Social Assistance Programme in future, it said.

This will enable the government to improve the quality of infrastructure and also deploy long-term savings mobilised in other needy sectors, as the pension contributions would be invested in the productive sectors of the economy, it added.

“The proposed insurance schemes, PMSBY and PMJJBY will provide much needed access to affordable personal accident and life cover to a vast population, currently not having convenient and systematic access of this nature. It will go a long way in improving insurance awareness and insurance penetration in the country,” it said.

PMSBY will offer a renewable one year accidental death-cum-disability cover of Rs 2 lakh for partial/permanent disability to all savings bank account holders in the age group of 18-70 years for a premium of Rs 12 per annum per subscriber.

PMJJBY on the other hand will offer a renewable one year life cover of Rs 2 lakh to all savings bank account holders in the age group of 18-50 years, covering death due to any reason, for a premium of Rs 330 per annum per subscriber.

The scheme would be offered or administered through LIC or other Life Insurance companies willing to offer the product on similar terms on the choice of the bank concerned.

The pension scheme will focus on the unorganised sector and provide subscribers a fixed minimum pension of Rs 1,000, 2,000, 3,000, 4,000 or Rs 5,000 per month starting at the age of 60 years, depending on the contribution option exercised on entering at an age between 18 and 40 years.

The period of contribution by any subscriber under APY would be 20 years or more.

The fixed minimum pension would be guaranteed by the government.